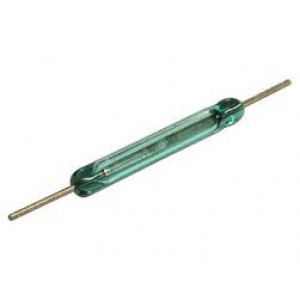 Normally Open: In a reed switch, the two contacts (which look like metal reeds) are made from magnetic material and housed inside a thin glass envelope. One of the contacts (sometimes called "blades") is a magnetic north pole, while the other is a south pole. If you bring a magnet up to the switch, it affects the contacts in opposite ways, attracting one and repelling the other, so they spring together and a current flows through them. A reed switch like this is normally open (NO) (normally off), unless a magnet is positioned right next to it, when it switches on.

Normally Closed: The two contacts are normally snapped together. As you bring a magnet up to the switch, the lower contact is attracted to the magnet, the upper one is repelled, so the contacts split apart, opening the switch and breaking the circuit. Reed switches like this are called normally closed (NC) (normally switched on), and they switch off when you bring a magnet up to them.